So, I started working on my homebrew setting for Genesys last year.

The world itself has actually existed in my head for around a decade now, I originally conceived it as the setting for a gaslands type car game that I’d started writing just before everyone and his dog released a gaslands game onto the market.

I’m probably putting more work into this than is necessary, but I’m enjoying the process, and it’s helping me put some meat on the bones of the world building.

So far, I have the racial/species archetypes, a shortlist of careers, and 2 fully fleshed out careers complete with 4 different Specialisation trees each. The trees themselves are mainly kitbashed SW ones, but I’ve come up with a handful of new talents scattered amongst them.

A freak error in the equipment of an ‘80s Soviet listening post led the USSR to launch missiles, the USA responded in kind, and World War 3 ensued. Along with the full Nuclear arsenals of both the East and West levelling every major city across the globe, the explosions led to seismic activity on a scale never before seen. Every fault line split, volcanoes erupted on every continent, and when the world finally stopped burning, the skies were naught but dust and Nuclear Winter had its grip on the world.

When the dust finally settled, the cocktail of toxic chemicals high in the Earth’s atmosphere had obliterated the ozone layer. Over the following years, the planet rapidly heated, and Nuclear Winter gave way to Nuclear Summer. Every glacier melted, the permafrost released all of its greenhouse gasses and the ice caps were completely obliterated.

With sea levels risen to their highest possible level, when the isolated pockets of humanity emerged back into the light, it was to a planet now unrecognisable from the The World Before. Hiding their towns from deadly sun beneath shaded domes, the human race now struggles to reimpose order on the world in a feudal wasteland filled with bizarre creatures, mutants, cultists, and other yet to be discovered terrors.

These will be a theme throughout the setting. I intend to come up with some mechanics, probably linked to Alchemy, regarding Radshrooms, potions, and their consumption.
Hella cool bonuses to skills, stats, etc. but at the price of giving your PC Rads.
A character’s Rad exposure will cause resilience checks, to prevent the accumulation of Rads.
Currently thinking along the lines of having set Rad levels where a PC will need to roll a Crit, due to being Rad Sick. (but I am open to suggestions on this aspect, as it’s still in gestation stage in my brain)

So yeah, that’s where I’m at so far. Let me know what you think folks, any feedback is most welcome (but be gentle, this is my first time homebrewing on this level, lol).

This isn’t a criticism at all! Just a couple questions. Why did you choose to go with talent trees instead of the usual Genesys pyramid? I was back and forth on talent trees vs. the standard pyramid for my own homebrew and so just want to consider why you went with the trees.

Nice work by the way. I’ve only glanced at it, and it’s not my kind of genre, but you can tell some love went into it.

Why did you choose to go with talent trees instead of the usual Genesys pyramid?

Short answer, I like talent trees, and am not overly fond of the pyramid.

Coming from Star Wars, as a player, I really like how they serve as a jumping off point for a character concept. I like how they make you think, “Why this career? Why this Specialisation in particular? What does it tell me about who this character is, and what they do?”

From a world building POV, thinking about which Specialisations I wanted to use and convert has really helped me think about the sorts of people that inhabit the setting, and the different sorts of PCs there’ll be.
Plus, slow as it might be, I’m actually really enjoying making them.

I have fesh conundrums.

I need ideas for currency. Both name and form, and I’m kind of drawing a blank.
The setting is an emergent civilisation, with a frontier like feel, and I intend for it be mainly based in what was Europe (if that makes any difference, given this is many generations after the war). So I’m sure they’d have something, but would it be new? Would there be minting? Would there be different currencies in different kingdoms?

Any ideas welcome on that one.

The second is more an idea I’m toying with:

I’m not overly keen on what the EPG suggests for Radiation, and this idea is still just gestating at the mo, so at this point it’s more just thinking out loud.

I’m toying with the idea of having it so when a Character exceeds their RT they take a crit, and also have to reduce their WT and ST by the amount they have exceeded their RT by until they reduce their current Rads.

Will probably base it on 6 or 7 + Br + Pr for your generic Human archetype (Domers), going down a little for Icies and Trunties, all the way up to 10+Br+Pr for Mutos.

Wbat do you think folks?

Make them carved out of wood. A round piece of wood with a burnt in pattern/marking made from a complex piece of metallic art. Like placing a brand on a cow. Call them “chips” due to being made from chips of wood and they are about the same size as old poker chips?

Forgot to come back her and mention, thanks to a lengthy thread on a post I made on FB I made, I settled on the unit of Currency being a Grubb. It’s origins being that a single Grubb should be enough to purchase a basic meal for a single person. By this point in New Humanities development most colonies, and clusters of settlements will be minting actual coinage for Grubbs.

Also, I have now completed another Career: The Judiciary.

Also, I have a discord server, currently populated with just my gaming group, but I’m looking to add people to it, in order to crowdsource feedback from a wider audience. 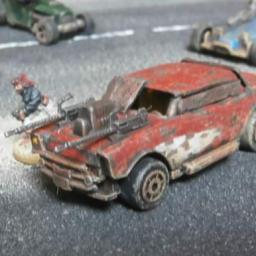 Check out the Black Sunshine community on Discord - hang out with 6 other members and enjoy free voice and text chat.

Edit: changed link to a none expiring one.

Is a Grubb an actual coin, or does it take a different physical form?

I was thinking probably an actual coin. Maybe differing slightly from place to place, dependin who minted it.