I was thinking of using Carrick Station from the Star Wars The Old Republic MMORPG as the basis for a central location in my next campaign.

Unfortunately my google-fu is failing me, in searching for a comprehensive set of floor plans for it (too many image results, and too confusing as to how all the bits fit together), so figured you fine learned lovelies might be able to help point me at some.

Also, if anyone has knocked up a decent stat block for it too, that would be extra awesome.

At any rate, does this help? Don’t think you can get much more specific than that, it is described as a “massive space station” after all. 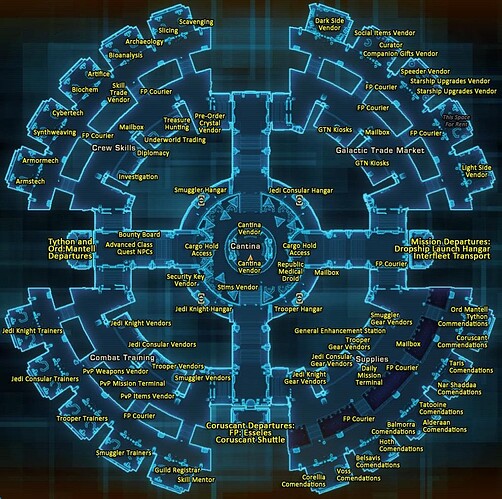 Aye, that’s the one I’ve managed to find, but I was getting the impression there were other levels, and there’s the massive upright sections, I wasn’t sure what was in them.
There was references to a ‘Penthouse’, where does that fit?
I never played SWTOR so wasn’t sure what other bits to the station there were.
Cheers dude

And that’s the tricky bit, isn’t it?

The truth of the matter when it comes to video games or movies is that in most cases, practical layout is scrapped in favor of what suits the needs of the product. That’s how come most ships in Star Wars are apparently just coils of hallway with occasional rooms (see the Crucible for exhibit A).

Furthermore, based on my cursory examination of pictures of the exterior of the station, it seems to be far larger than the map would tend to suggest (note the hangar size and what appear to be rows of windows on the sides of the “wedges,” ten per “light section”).

Size estimates:
If each “light section” has ten floors and each floor is about 12 feet, each wedge is approximately 800 meters from bottom to top (taller than the One World Trade Center), not counting the spindly bits. Taking that measurement, the main “dish” appears to be about 2600 meters across from one hangar bay to the other, giving us an area (if I didn’t mess this up) of 5.3 kilometers.
If we take a “population density” of 8,000 (rather arbitrary) per square kilometer, then that’d be about 42,500 personnel. That’s the size estimate I’m going with as I try to parse what it might contain.

Population density is extremely hard to estimate for this because we basically have nothing truly corollary with which to compare it. We can’t really even compare it to a city because cities are built on the ground! Thus, I picked an estimate that’s high, but below New York City. Like I said, arbitrary.

Here are some suggestions of how to apportion the station:

It is worth noting that precisely because it is an artificial construct, stations will make much, much more efficient use of space than cities, which can sprawl out quite broadly. Thus, population density could be extremely, unthinkably high if everyone lives in small, tightly packed apartments. I have to make assumptions and arbitrary guesses, but when you get to this scale few will second-guess these numbers unless they’re as nerdy as I am.

Well, that is a sterling breakdown and analysis of the place. Excellent work sir, and thorough as always.

However, I chose this particular station as the scale of that floorplan is what fits with the purpose I have in mind for it.

So I’ll probably take your advice and narratively handwave the tower block sections as residential (probably about 10-20 levels based on the map scale). Maybe say there’s a couple of engineering decks below that main central layer, and a station control/bridge deck above the central hub.

But gonna find a pic with fewer labelled bits, and re-key them all to fit my purposes.

OotiniMaps has it all! You can pick anything that has a map up to I believe Shadow of Revan expansion, anytthing after Shadow of Revan is not listed {Zakuul and Odesson or Iokath for example}

Oh wow! That’s excellent!
Gonna have to pour iver all those, and see if I can peice them all together in my head (it helps with my process).
Not to mention browsing though aaaaall the ither locales, lol.

I’ll have to remember that.

Glad to be of help, I use the site constantly myself; mostly for Cantina layouts