Creatures with Ranged Attacks (for a Swamp / Forest Encounter)

I’m currently trying to create an encounter in the swampy forests of Dromund Kaas for my group but I have trouble coming up with good creature opposition, mainly because I want to put verticallity into the encounter and that probably requires some kind of ranged threat.

That’s where my problem is right now, I’m coming up empty on creatures with some kind of ranged threat potential that could fit.

Has anyone insights or ideas for this?

Instead of ranged attacks, have you considered flying creatures? It’ll add the needed verticality if you play it right.

Though, for ranged attacks, there isn’t much out there that I think would fit in a swamp, but you could reskin them as well

Yeah I was looking into some kind of acid spit attack and also winged creatures.
These profiles help alot =D

In the Beyond the Rim there are some waterborne horses with Water Gun. You can reskin that to spit acid (Burn 3 quality with maybe Pierce 2-3)

That also sounds sweet, will check that out immediately

Regarding the Creatures themselves, I think I have settled on Sithspawn Rhak-skuri (which could be especially fun since the party’s archeologist / pilot recently developed a phobia for things with too many legs xD)

As for a ranged-attack creature, you could always create your own and give it either a tongue-lash attack (like the toad creature in J:FO – that could be ranged, right?) or possibly a creature that fire sharp quills (like the titulary creaures from the Critters franchise).

This is space fantasy. If you want a creature that biologically produces and expels blaster bolts, go for it. Optionally, sonic attacks, ranged grapple with a tongue, or spitting venom/acid are all workable. You could also have tool-using creatures that throw sticks (maybe even smeared in their feces for some infection possibility to get some use out of the Resilience skill), rocks (what if they’re radioactive but the native creatures are effectively immune)…or possibly (explosive!) seed pods.

…or a creature that naturally uses the Force. Although try not to get carried away, my mind is already going down the ‘electric eel, but using Force Lightning’ route, and that could be a bit much.

Even a non-Force-based electrical attack could work, as could a squirt of musk or a stream of vomit or a thread of sticky webbing. At fairly close range, even flinging eye-irritating hairs (or whatever the hell a spider uses) to disable foes is a possibility.

These are all great suggestions. If anyone actually stats them up, please post. I am planning next adventure that includes a forest traversal.

Came upon this one while looking at the ones GalaxyMaster posted. Good for swarms.

My PCs just went through a swampy area. Threw a Dianoga at them that had ranged tentacle attacks.

Linked 6?? That’s scary. But RAW only has range Engaged. Did you change it?

If memory serves, there were a couple different sets of RAW stats for the Dianoga. Could be wrong, but I believe I saw a couple iterations when I was typing up the statblocks for TheOuterRim.

Also a badly photoshopped Rahk-Skuri adapted from a Colicoid Artwork I will be using: 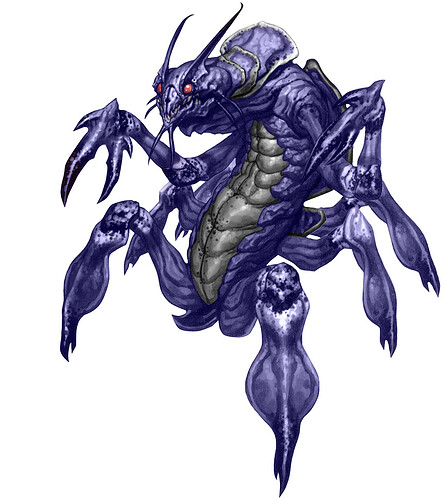 I’ve not come around to statting the stronger variant for the Sithspawn Rhak-skuri Guard (Rival) which will get some kind of Pounce attack I think and as a sidenote: These profiles are kinda balanced towards a Playergroup having about 600 xp under their belts, so take that into consideration and tone them down for lower xp players maybe.
(And yes, these warriors would probably normally fall under the Rival Category but I thought 4 Rival Rhak-Skuri would be lame and for my group this kind of strong minion seems okay since they tend to slaughter stuff horrifyingly quickly).

Decided to redesign them once more, so I can use them in a Phalanx instead (the PC’s may or may not disturb a hive of these things).

so Profile would be now a little bit weaker:

Let me know what you think =)

The fear check especially makes sense in this case, when they’re operating in a phalanx. Regardless of any panic pheromones. I’m picturing the chryssalids from XCOM 2, and being surrounded by eight of them would be terrifying enough on its own.

Fear check if even only one, due to pheromones. So if >4, increase difficulty +1, and so on.

That Burn 2 is nasty, with no way to put out acid… might want to list (for the GM) acceptable neutralizers, given that CRB says “maybe GM can tell you”

I think I’ll go along with P-47’s suggestion and just make the fear check due to the swarm.

Burn 2 is nasty, true (Although it only does 5 dmg without the Pierce as per RAW I believe - it says “deals base damage of the weapon” or am I reading this incorrectly?).
However, yes I will provide my players with some options of neutralizing the acid.

Burn 2 is nasty, true (Although it only does 5 dmg without the Pierce as per RAW I believe - it says “deals base damage of the weapon” or am I reading this incorrectly?).

It is not clear or even really addressed, but the general consensus that I have heard is that passive qualities still apply to Burn/Blast damage, so it would be 5 with Pierce 3, you just wouldn’t apply Success.
I think this makes the most sense from a “realism” perspective as well, but your mileage may vary.

If you look at the description for Pierce, you could make a case that it applies only to “attacks” and so it would not include persistent damage from Burn. However, you could use that same argument against Blast, and it’s pretty clear that certain weapons with Blast and Pierce were intended to still add Pierce. Same with Breach, but the wording for the Breach quality is slightly different. However, I do not think this adds the “attack” wording any further weight because the differences are mostly incidental and the description says basically the same thing, just with fewer words.

However, yes I will provide my players with some options of neutralizing the acid.

Yes, but what options are those?