Being that I’m such a stat monkey, for my own homebrew era, I have found myself enamored with the work of the Youtuber EC Henry, who has taken background/forgotten ships and made custom 3D models for each, including a little lore and anecdotal backstory for a specific ship of the class.

Because of this, and the detail put into these designs, I’m taking it upon myself to stat out these creations to be inserted into my games, and I thought I would share the project with the forum. If there are any other fanon ships that you think would make good additions to the system, feel free to let me know or post your own stat renditions of said ships.

Back on topic, the first ship I’ll be undertaking is the Porsche “Pegasus” redesign he did when covering the team up between Porche and the LF art department.

To me, it reads as a reassessment of the ARC-170 that is mixed in with the U-Wing, turning it into more of a dedicated recon fighter, rather than the multi role heavy fighter role that the 170 previously filled in the Clone Wars.

My preliminary thoughts put it at stats are as follows 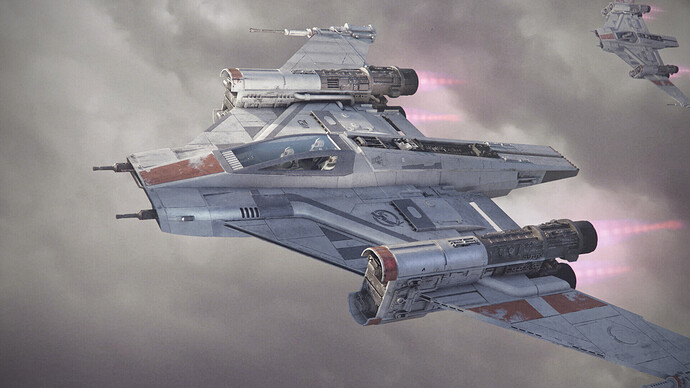 Regarding the Profile:
HT and SS seem to be a bit high when compared to other starfighters, especially when it’s supposed to be a Recon vessel.
The same goes for the armor and also Sensor Range: Long is pretty pretty rare.
Furthermore I’d really reduce the Encumbrance since 20 is really alot (the Silhouette 4 Kimogila Starfighter got that much and its more than double the size of this ship).

For comparison: X-Wings have HT: 10, SS: 10 and Armor: 3 and they’re full on combat starfighters.
Another comparison, since actually the Kimogila makes a great comparison case:
Kimogila Starfighter (Silhouette 4): HT: 16, SS: 14, Armor 3 and 2 Defense in the Front; I’ts encumbrance is 20 and is stores consumables for 2 weeks.

If you want this vessel to fill a recon role and keep the Long Range Sensors (which even large ships rarely have), I would suggest to reduce HT, SS and Armor considerably.
A somewhat high SS would fit a recon vessel but I’d personaly go with something like this:
HT: 6 (which is way more common in starfighters of that size)
SS: 10 (because it makes sense for a recon ship decked out with sensor equipment)
Armor: 1 or 2 but give it Defense 1 in both Zones. (many combat fighters got armor 2 so I wouldnt go larger than that)
Encumbrance: 4 or at max 6 (more in line with other starfighters of it’s size and since it sports a large sensor array there just cannot be that much room on the ship and they still need to store consumables for 1 month (do they really?)).
Maybe reduce the Consumables stored to 2 Weeks or something like that, 1 month seems excessive or more fitting for a research / deep space vessel.
Realistically these Recon Fighters should scout for a fleet right? So Why would they need to be away from their carrier / station for a whole month?

At least that would be my take on the profile.
Hope this helps a bit.

You’re dramatically underestimating the size of the fighter. It seats THREE crew in the cockpit, and it’s far, far larger than something like an A-wing or TIE fighter. Part of recon in this case is self-sufficiency and range. Additionally, it isn’t built like an interceptor. With speed 4 and +1 handling, it could easily be fairly well-armored.

Add to that, the Kimogila is a very small sil 4, by everything I can see. If I were statting it, I’d make it sil 3. Meanwhile, this ship is a large sil 3, meaning that size isn’t all that different. Comparing the two, the Kimogila has +2 in both SST and HTT.

This ship reminds me of the G-1A starfighter, which is sil 3 and has 14/12, same as this.
There are several other (sil 3) fighters with similarly robust hulls, so I don’t think this is excessive.

However, I would suggest considering lowering its Armor by 1. HTT is a measure of hull integrity, while Armor is a measure of, as the name implies, armor. There is overlap and all sorts of stats-monkeying that goes into manipulating those two numbers, but that’s often only when you get to larger scales, like with ISDs and what-not. Because this ship is a dedicated scout, I’d recommend giving it just 2 Armor since it isn’t intended to engage in combat.

This makes it a bit closer to the JumpMaster, which was sil 4, but a non-military vessel. It was 2/14/8.

As for Encumbrance, I think it could easily store that much, and its mission profile would suggest that it needs to. Storage doesn’t have to be within the body of the ship, but could be in external panels on either the tapering tail or the ample wings, close to the cockpit where they are thicker. In-cockpit storage would likely be a cabinet behind the pilots, and that could be fairly deep.

TL;DR: I think it’s fine as-is, except lower the Armor by 1.

I mean if this new ship is supposed to be vastly superior to the Arc-170 then okay.
And yes, point taken there are some other fighters that are this beefy. (Sadly the official profiles are all over the place and not build upon the same principles, so this is probably fine).

Thanks for all of the feedback guys.

To give more insight into my thought process, I used a variety of Incom products to inform my decisions here.

For the record @Fl1nt I used the stats of the 170 from Collapse of the Republic, which put it at Speed 4, 0 Handling, with 18 HT and 10 SS with 4 Armor. While this does have a crew of 3, it lacks the utility of an astromech that the 170 and X-wing have to handle additional equipment, as well as the robust weaponry of an ordnance launcher. Bringing down the HT and buffing the SS made sense as an evolution of the 170, and reducing its Armor does make sense, but to me, even a recon fighter should be able to take a punch, hence why I initially put it at Armor 3, and not armor 2 that I mostly see relegated to civilian recon ships and interceptor role craft. That being said, I can see a fair argument for Armor 2, since the ship does have the advantage of seeing any fighter long before the enemy can see it.

I’ll play with it a bit more to see if I can’t find the place where I’m personally satisfied.

So, here is what I have come up with. Reducing the armor but raising the HP available to give it the overall versatility that the 170 tried to achieve but failed to do. 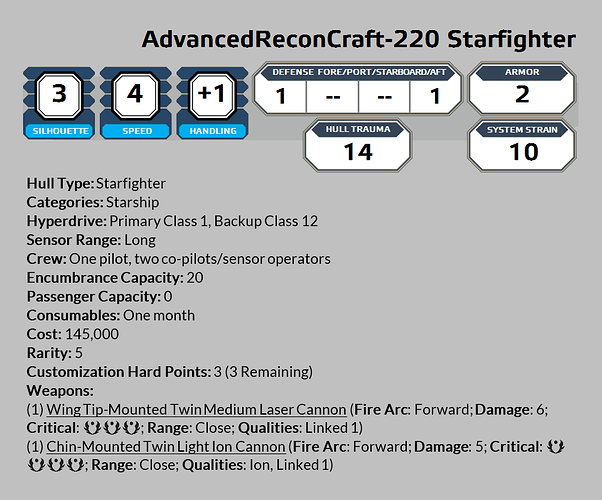 We have only seen the Neb-B in the hands of the Rebellion, but various bits of lore puts it in service of the Empire, and we have never seen it in that role, and looks nothing like most Imperial designs. EC Henry once again providing all the work on this one (please check out his Youtube video on it, its pretty dope).

Unlike the first ship, this one we have a solid base for, and using the core stats of the standard Rebel Neb-B, I have come up with the following. 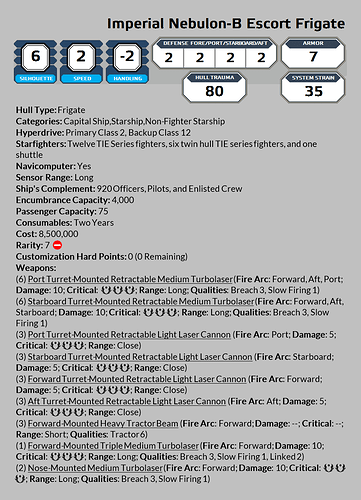 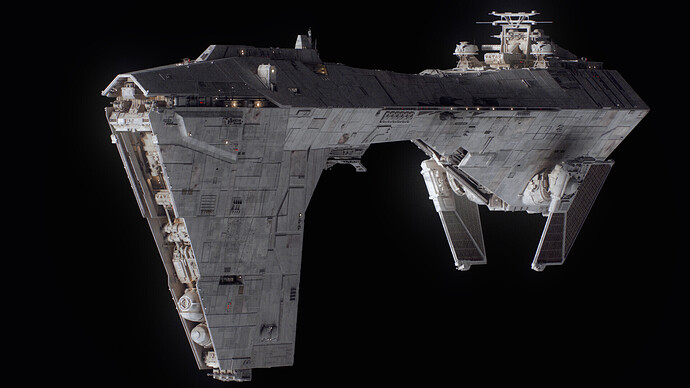 While not a Fanon ship, after a recent run through Jedi Knight II: Jedi Outcast, I was reminded of a unique ship that I have decided to adapt it into my own campaign as a dedicated ship class.

I present the first draft of the Occupier-class Assault Carrier, adapted from the Doomgiver. I have also used the Cometstrike Drop Pod as the basis for the All Terrain Rapid Assault Pod (As I find that name far more interesting than All Terrain Rapid Deployment Pod), adding in the compliment for 4 AT-class walkers, provided they are two legged. 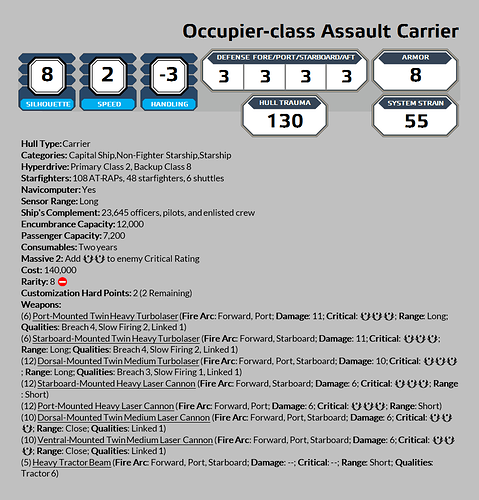 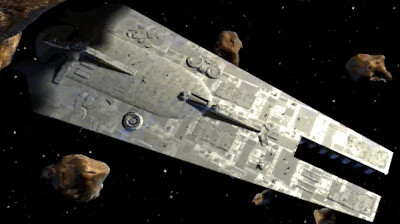 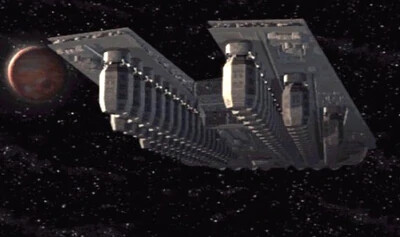