Gift for our GM 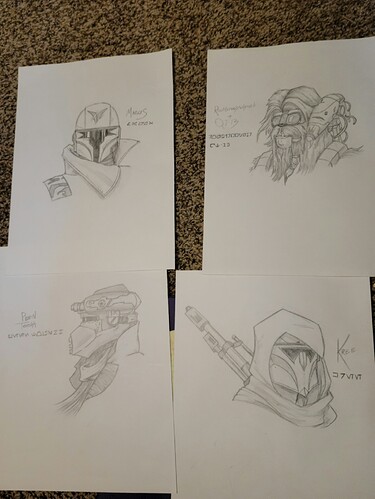 For his 1st Campaign our GM drew all of our characters for us. He even drew my J
Anomid Jedi character from a one-shot session we did! Now, I don’t think he knows that I have his drawings as they were put inside the player’s handbook he was borrowing from me and he returned it. I wanted to frame them and give them to him, but as each of the four pictures are on 11×8 sketchpad paper I was looking for better ideas from the community.

Since they aren’t centered, they probably wouldn’t frame very well without being centered through cropping or some-such.

If you can digitize them and maintain visual fidelity, you could then crop the pictures to center the images and then adapt them to a size more easily framed.

And if maintaining fidelity is hard, downsizing the pictures to a little 4x6 or something would allow you to hide the loss of detail by losing detail. :P

Then that preserves the originals in all their glory (they could be laminated or whatever if it was particularly necessary to protect them) and provides a nice gift for your amazingly artistic GM.

Thanks. I have an old printer/scanner that I was gonna pitch here soon b/c it’s sucking ink and glitches like crazy, but before I do I might as well digitize them. I even thought about inking them, but to do that I’d have to re-up my ClipStudio subscription. I got some ideas it’s just finding the time to do everything. The lamenation is great idea though! Can’t say I’d thought of that.

While a gift is nice, I think you should give the GM back their artwork.

While a gift is nice, I think you should give the GM back their artwork.

^
Or at least preserve the originals like I was suggesting (so before laminating, you may want to check with him).

Yeah I had thought of checking with him before I alter ie laminate them. Idk if he’d want to do something with them in the future. I think I’ll digitize them and our next session give them back. Then use the digital files to make a b-day gift or something.