Heroes On Both Sides

In the past I have written a fan supplement called ‘Heroes On Both Sides’ which aims to provide a wealth of NPC stats for anyone looking to run a game set in the prequel / Clone Wars era - including stats for named characters like Mace Windu, Commander Cody or even Jar Jar Binks.

The current version of the book can be found here on SWRPG Community’s Homebrew page: Homebrew

I am currently working on an updated version of HoBS. Although for the most part this is a cosmetic revamp designed to make the book more closely resemble the official material, it will also involve updated statblocks for existing characters as well as brand new ones.

I’m opening this thread as a one-stop shop for folks to discuss the book, ask questions, offer feedback, and for me to be able to occasionally post previews of things I’m working on.

First preview, to celebrate May the Fourth and the premiere of the ‘Bad Batch’ TV show, an updated set of stats for the titular characters, including their newest member Echo! 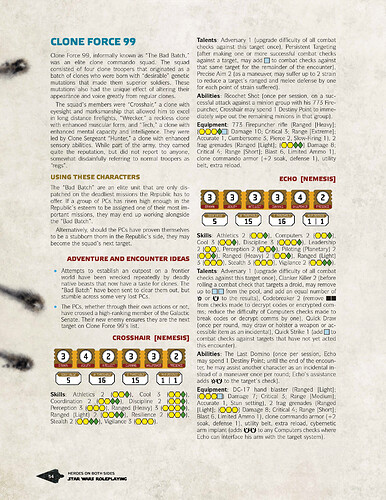 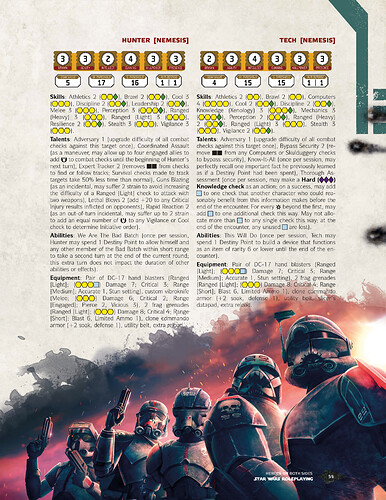 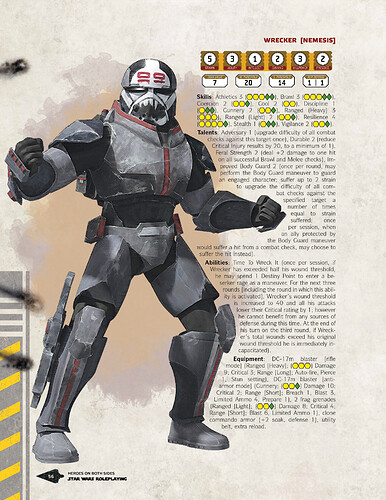 Hey @Kualan, good to see you again.
First looking at Crosshair: I really don’t like Slow-Firing on sniper rifles, and it really doesn’t seem to make much sense here based on what we see. I’d suggest dropping it, but maybe adding Prepare 1 instead.
Other than that, looks good. I’d consider buff his Ranged (Heavy) skill by 1 though.

Excellent, I like Echo. I’d suggest giving his arm an ability where once per session, he can use it as a dataspike.

Hunter: With Guns Blazing, I don’t think he actually uses two pistols, does he? Maybe I’m just misremembering, but I think he uses a single pistol and a single knife.
Rapid Reaction adds Success, not Advantage.

Wrecker: Missing an “r” in “berserker.”
I think Time to Wreck It might be a bit overpowered. Perhaps it has an effect on Critical Injuries rather than so drastically increasing his WT?