I broke my GM. Again

Today, we had a session of a long-running AoR campaign (closing in on TESB), where we play a Rebel Special Missions team. We found a hidden Imperial research installation where Dr. Boll had successfully cloned the zillo beast, and the Empire was trying to control it to use as a sort of bio-weapon AT-AT.

While our crazy, drunk Mandalorian (who’s soloed a Krayt Dragon) excitedly ran off half-cocked to try to kill it herself, the rest of us made our way into the base. Shooting occurred. After taking out a couple of Death Troopers, I used my Counterespionage Signature Ability - 4 success, 1 triumph, 1 threat.

I start narrating how Dr. Boll’s plan will be foiled. “During the shooting, some door controls were hit, and a room where another possible cloning subject was being held and studied is opened. Its occupant can tell his big buddy, the zillo beast is in pain. So he’s heading topside to calm him, and let him sleep.”

Then I bring out…the mini… 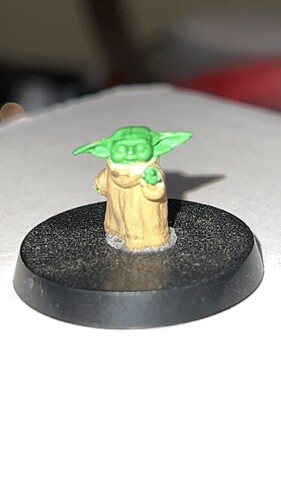 Our GM stands up, scratches his head, paces the room. Speechless.

He leaves the room. Screams. And comes back, not having refreshed his drink, but with his full bottle of vodka.

“I’m only letting you do this because of the mini.”

And that, my friends, is how our team got Grogu as an NPC companion, and will probably be the ones who leave him in the care of the Niktos where he was found at the beginning of The Mandalorian.