I present you.... the Xenosith!

So it started out as a meme: 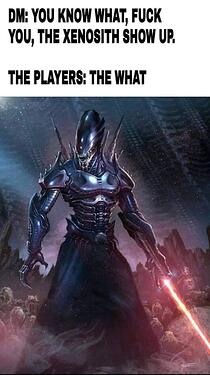 But then it got me thinking!

How would you stat out the Xenosith?

Obviously Nemesis, it probably ate a jedi or some force sensitive to gain it’s powers, but I’d still keep it savage or animalistic so no Mind Trick and similar powers. Mostly statted as a normal xenomorph, adding and buffing it according to the newly gained Force instincts.

Force powers: Enhance (Basic Force Leap, + Brawl), Sense (basic) and I could argue for basic Misdirect for sneaking on people

As for weapons, a standard Claw (like Trandoshans), a basic Lightsaber, Tail Lash for some disorient.
Also if it suffers a critical hit, I’d make everyone who is engaged with it roll a Vigilance check to not get sprayed with some Acidic Blood!

What do you think?

What are your ideas?

For avoiding the Acidic Blood: I’d suggest a Vigilance skill check for the very first time that it occurs, then a Coordination skill check for any future occurrences (later in the same encounter, later encounters, and other xenosiths).

Alternatively, use Threat or Despair on a successful attack against it from Short or Engaged range. That wraps the “trigger” into the initial roll and doesn’t require a saving throw.

Yeah, that’s probably better! I played more DnD than SWRPG lately, I need to get back into the game!

My I have your permission to use these as a key part of my next SW RPG campaign? :)

Could you tell us how the players reacted to it and how well the scene went?
I would love to hear that!

No players yet; campaign is under construction (alternate timeline).

As a GM I want Sith to be active in the Clone Wars, as the primary antagonists for the Jedi players/faction. I saw your stats for the XenoSith, and I am like, BINGO, there is its, exactly what I was looking for. If a secret Clone army can be built, why not a secret Sith Army? Kuat Drives and the Kamino Cloners gets their credits either way, they don’t care.

I also intend for the Jedi to NOT be placed in charge of the GAR.

My intention is for Palpatine to not kill the Jedi via Order 66, but instead have them worn down by non-stop battles with Sith Brotherhood members (forget about the rule of 2). If the Kaminos can make clones, why not have some amoral Kamino cloners make Xenos combined with Dark Magic …err… Dark Side of the Force/Alchemy on one of the secret Sith Worlds (the one in the recent movies with the Temple, Clone Vats, and underground shipyards), and also make Sith Starships, Starfighters, combat vehicles, and weapons/armor. Now I have a three front war Clone War to make things more interesting. :)

Have XenoSith terrorizing the Galactic Republic (you know, as Palpatine knows EXACTLY where the Jedi are, he can send his Sith forces where they are not), show the citizens how useless and incompetent the Jedi are in their time of need, as opposed to the heroes of the GAR, and turn the public against the Jedi; making it easier for him to later band them as traitors and cast them out; as part of the future Empire.

Unfortunately busy at the moment, how ever I encourage you to come up with it yourself, so you can understand the system better.
I’d recommend to pick a similar NPCs (a Vornskr, a bantha and no idea for the tank, not really a SW trope), reskin it, tune the characteristics accordingly, give similar attacks / abilities for the xenos, like the acidic blood / bite, then post it here and we help you round it out

Good suggestion, I will do so at a later time!

On a second thought to my post above, making clones is already been done and debated; I think having the “Xenos” being a pre-spaceflight species from the Unknown Regions being “uplifted” by Sith survivors of the last great Jedi-Sith War, and being “enhanced” with Dark Force and Sith Alchemy, gives me much more creative freedom on how to use them, and create additional organic war machines (Xeno Hound, Xeno Rhino/Warthog, Xeno Ogre, Xeno Pterodactyl…)
.
I also should post these things on my own thread, so as not to derail yours. ;)

No, no keep this going. Spread the Dark Arts