I have created a talent tree for a universal specialization for a Mandalorian Forgemanster, and I’d love some feedback. Does it seem balanced and appropriate for the concept?

I took the Guardian Armorer and simply removed all Force talents and replaced them with talents from the Death Watch universal spec and one or two general techie talents.

Edit: added the latest version below. 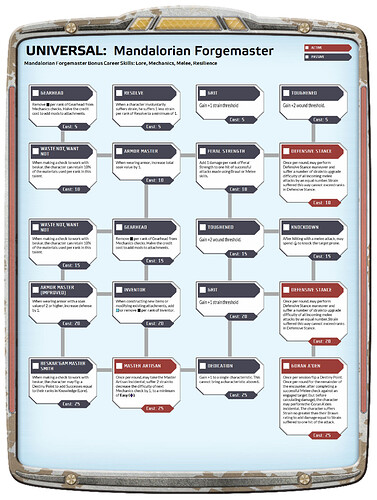 That looks pretty good.
I would switch the position of Armor Master (Improved) and Tinkerer. 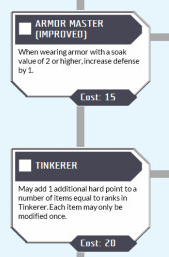 I think this may be a bit too potent, and not unique enough. Generally, just combining two trees doesn’t give a great result. Specifically, it’s too similar to Death Watch Warrior with the jetpack talents, meaning that there’s no reason to take both. Likewise, most specialization trees, and universal trees in particular, should have a talent that is unique to them.

Also, with the exception of Supreme Armor Master, once you remove the Death Watch Warrior talents it’s pretty similar to a couple existing trees. If someone wants to be a Mandalorian armorer, they could pretty easily get Gadgeteer and then Modder or Outlaw Tech (probably Outlaw Tech), or maybe Outlaw Tech and Death Watch Warrior. Either would achieve roughly the same result, and they’d only lose out on Supreme Armor Master.

My suggestion would be to pick a different secondary niche for Forgemaster, or just not make the tree, pointing interested players to the combinations listed above.
As it stands, there is not much about the tree that actually requires the characters to be mechanically oriented. Both Inventors and both Gearheads are entirely optional, and the rest are either passives (Tinkerer, Jury Rigged) or unrelated to mechanics. This makes it a good tree for any character to pick up, and outright better than Death Watch Warrior since it has all the same special talents, plus Tinkerer, Jury Rigged, and Supreme Armor Master.

Specific points regarding how the tree is currently constructed:
Inventor is too cheap. The only time it appears below tier 3 is in the Armorer tree. With a second rank then added in a cheap position, it becomes very easy to stack Inventor Boosts when combined with Outlaw Tech.
Gearhead is too close together.
There’s a typo in Gearhead where it should say “halve” but it says “have.”

Thanks for the great feedback, you have given me a lot to think about!

I spotted that typo after creating the PDF and it really pissed me off! The good thing about having to change things around is that I get to fix that little mistake!

I wanted to stay away from creating a unique talent for the tree because that just seems a little bit beyond me at the moment. I put Supreme Armor Master in because (I believe) the only tree in which you can get that currently is from the Guardian career, and no Force Rating games are pretty common, so it technically would be unique in those games. My problem, I suppose, is that I wasn’t considering how it would work when the characters have earned a ton of XP. I’m used to characters who only have one or two Specializations.

I definitely haven’t put enough thought into the paths through the tree; it hadn’t occurred to me that you could just bypass the main techie talents.

What I think I will do is remove the Jetpack talents and replace them with techie ones and then rearrange the tree a bit.

I’ll be happy to provide more feedback as you continue to develop the tree. :)
I’ve played in games ranging from starting XP to +1,200 XP, so I’m used to thinking long term, especially because I often look at this sort of thing from a general consumption perspective, and I know how some people can get… carried away with stacking abilities and bonuses, particularly when it comes to crafting.
Crafting is a good system, but it is easily breakable through the RAW if someone wishes to exploit it.

You also need to look at what career skills the spec will give.

I forgot the career skills weren’t on the sheet. I took the four from Armorer and replaced Lightsaber with Warfare. So it would be Mechanics, Outer Rim, Resilience and Warfare. Seems to fit the concept, I think, but I’d be happy for any feedback.

Maybe drop Outer Rim for Lore. Mandalorian armorsmiths were well versed in Mando-lore (sorry, I had to! :'D).

Things to consider for a unique talent:
Coercion bonus/other bonus for wearing armor.
Some bonus to Mandalorians within short range.
Bonus related to Knowledge (Lore) (such as “once per encounter, may add ranks of Knowledge [Lore] to Soak for one hit of a successful attack targeting the character”).

I like the idea that the armorer would provide a bonus to allies and/or have a bonus related to wearing his armor, beyond simple durability, or else have some other bonus granted by his knowledge of Mandalorian tradition and armor-forging methods.

Yes, I like all of those suggestions. The pun though, I didn’t like that. I loved it!

Another thought I just had; maybe the Forgemaster should instead be a Signature Ability for the Death Watch Warrior. It seems to make sense that only the most experienced Mando warriors can go down this path. It would mean that I would need to come up with a suitable, upgradable ability, but it seems to make sense.

Perhaps, but Signature Abilities are unique to careers. I’m also not sure how you’d make a Sig for it that isn’t either overpowered or too close to existing Sigs like those from Soldier and Hired Gun.

I would argue that it is not the case that only the most experienced Mandos would go down that path, as they are typically trained from a young age to carry on the responsibility, usually by their parent. If his buir is an armorer, he would likely be trained as an armorer as part of his Mandalorian training.

Okay, revert to previous plan then.

I’m thinking about a different type of unique talent. My thought is that I want it to relate to crafting, but I’m aware that the crafting system can already be easily broken, so what if it’s some kind of buff for recycling beskar? Maybe similar to Uttini!, so it removes setbacks on checks to recycle beskar from items.

Does this sound doable?

Not in a way that makes it useful. How often is recycling beskar going to actually come up?

On second thought, perhaps a combination of Knowledge (Lore) and beskar.
So perhaps it’s something like “when working with beskar, may flip a Destiny Point to reduce the difficulty by ranks in Knowledge (Lore), to a minimum of Easy” or something like that.
Maybe add Success. That could turn a failure into a success, but it could also reduce the time it takes to craft things with beskar since additional success reduces the time required.
Maybe add something about recovering an additional percent of the cost on failed checks made with beskar.

I very much like having to use Lore for handling Beskar. It’s an ancient art passed down through generations, and a safely guarded secret of their people.

Overall for the tree, I would say focus less on combat and more on crafting. Yes a Mando forger can hold their own, but they’re on the front lines and shouldn’t have to fight unless they need to. Maybe give them a career spec in Melee, throw in a rank of Toughened and keep the Armor Masters, but I would say that’s all you need for them to be combative.

I also wanted to ask what did you use to display your talent tree, and if it could take custom inputs? I can easily do it on Oggdudes generator, but I don’t know how to display it without it looking like trash.

Thanks for the feedback, it seems pretty much in line with my own thoughts at the moment.

I just used OggDude’s to make the tree. I built a new character with this spec, printed it as a PDF and then used Acrobat to remove all of the other pages. For some reason Acrobat wouldn’t let me export as a png so I had to do that in GIMP.

Huh alright. That doesn’t sound too bad, thanks!

How does this wording sound for a 25XP talent?

When making a check to work with beskar, the character may flip a Destiny Point to add Successes equal to her ranks in Knowledge (Lore).

In addition, on a failed check to work with beskar, the character can recover 15% of the beskar used per rank in Knowledge (Lore).