Hey all! I’ve apparently been in a homebrew-in’ mood, because I have yet another thing to share and get thoughts on. Unlike my other new power (Kemna’s Revelation), this one is much more general, and solves a major problem that we’ve had for a while - there’s no power for object reading!

I know several peeps have taken a stab at this, and several very good options have been created, but here’s my version. Maybe we can synthesize! Let me know what you think! 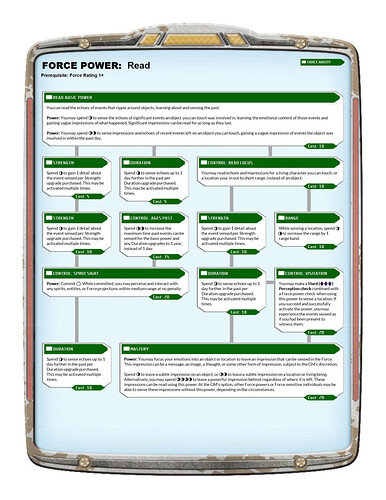 Thanks for sharing. I must admit that I don’t really understand the difference between the two basic applications in the very first box. As I GM, I would be hard pressed to say what required one pip vs two pips for the basic use. Do you have some concrete examples you could provide to distinguish them?

I’m also a bit confused by the Duration options combined with Control: Ages Past. So, normally, you would just be metering out information a couple days back in time, but with that Control upgrade, now it is measured in years of time?

Good questions! So, something that would only require one pip is something like a violent and traumatizing murder committed with a knife. That would be a strong echo, and there would be no concrete time limit on how far back it could be sensed. Eventually that echo would fade, but it could be years or decades, and someone could read it with just one pip.

The two pip version is like Foresee, in that you can only get visions of events within one day of the present, just into the past instead of into the future

. So using the same knife to chop wood is not really something that would create a strong echo, so you have to spend more pips to learn about that event, and have a time limit (which starts at one day) before that event is too far in the past to read.

Basically, events that are infused with strong or turbulent emotions or events that speak of powerful Destiny are strong resonances that can be read regardless of how long ago they were and with only one pip. Anything else requires two pips, and you have to try and sense it within a certain amount of time or else it’s too faded.

The Ages Past control just extends the time limit. You don’t read literally EVERYTHING that happened, but if you’re looking to sense what happened at a certain time, you can look back further. Does that make sense?

It’s basically Foresee, just in reverse, and you can go back further because it’s the past, so the GM doesn’t have to worry about making sure it happens the way you see it

Speaking as the author of one of the other options…

That’s some nice work. Psychometry is a power that can be approached quite a few ways, and until/unless we get an official one (a Fallen Order book, maybe?) having multiple takes on it is perfect, allowing for GMs to pick the one that works best for them.

Glad you like it! Anything you can see that I need to fix? Or clarify? It seems like, from Jendefer’s comments, what constitutes a “powerful echo” isn’t very clear…

I think about psychometry-like abilities a lot so the distinction made sense to me, but…

Oh, do you want to post your version? I’d like any advice available for my version (Read) to ensure it’s the best it can be, but it can’t hurt having both in the same place

Thank you for clarifying. The descriptions said “significant” rather than “powerful”… maybe you should consider going with the stronger term, like powerful/traumatic (so we know it could be positive or negative). And then maybe the other use could say general or vague, to highlight the difference. Just a suggestion.

I might be a little cautious about the wording because I’ve played in fantasy games before with history spells, where the GM’s interpretation of “significant” was from the perspective of the item, leading to frustrating situations where the result I got was something like, “I chopped down a tree today, that was awesome! Who was holding me? I have no idea. Some hand.”

It’s basically Foresee, just in reverse, and you can go back further because it’s the past, so the GM doesn’t have to worry about making sure it happens the way you see it

That was a very helpful comparison. I’ve GM’d for a player with Foresee before, but it was mostly used in a narrative way rather than a metered way, so I didn’t recognize the similarity.

Sure, I’ll make that change! Thanks for the advice!

I mostly use powers like this in a narrative way, too, but I wanted to keep the format similar just so players can’t read things from a million years ago unless it’s something that could conceivably endure that long

So other than the clarification on the powerful echoes and general echoes in the base power, is there anything else that needs to be addressed?

Any upgrades that are too strong? Is the cost of the upgrades fair for what they do?