That moment when a campaign idea clicks

Been tinkering with a campaign concept based on Les Misérables, but it hasn’t quite clicked until reading a post on Twitter just now:

Coruscant right after RotJ, when word reaches that Palpatine and Vader are dead, with factions supporting the Rebels & Empire in the undercity.

I was thinking of a AoR based game on coruscant right after the events of RotJ as well. In the final moments of that film I believe the people pull down the statue of the emperor. I was thinking that I would make that be a rebellious act of the people and the Empire would struggle to regain order and even fall back to Coruscant in an effort to rebuild. My PCs would not be at the battle of Endor and be in a better position to infiltrate the planet before the empire regroups. They would be special ops level combatants with experience in training general population to be resistance cells and their mission would be to disrupt Empire operations while the rest of the fleet liberates the galaxy. The PCs would have to train rebels and would try to figure out how to make covert attacks on the empire. Seems like it would fit in great with the les miserables theme. Maybe this can add to some of your inspiration.

Once that “Coruscant after news of Palpatine/Vader” hook did the trick, all of the story ideas and elements of the campaign were unlocked for me. Since it’s Les Mis inspired, I’m looking at the PCs being a mix of idealists from topside mixed in with the “gutter trash” from the lower levels, all pushing back against the Empire. Given the concept, I see it as a limited run campaign with a set end (still finalizing that end point, but thinking that - since The Mandalorian has already fudged some of the Aftermath trilogy by revising Cobb Vanth’s story, the PCs may be the ones to get Mas Amedda off of Coruscant…the ones who survive that long, anyway) and no punches pulled, not actively trying to kill the PCs, but not applying plot armor, either. And, coincidentally, that scene from the end of the RotJ Special Edition is where the campaign will start - with the PCs in Monument Plaza…but after the camera cuts away from Coruscant, the Empire comes in trying to restore order.

Still some finalizing of campaign details to do, but I’ve even started in on design work. 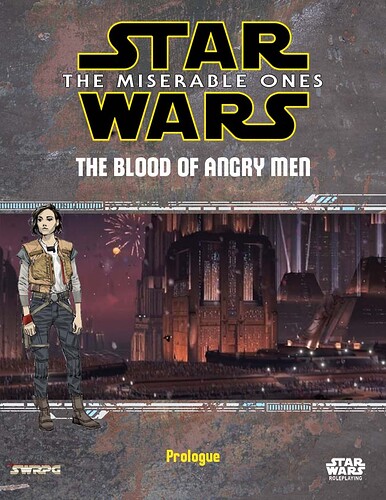 My campaign clicked when I asked myself, what kind of campaign would I like to run set in this new Disney Canon timeline? I made a large Miniature Market order (in for a penny, in for a pound…) for all the “Black Series” books like Rise of the Separatists, Collapse of the Republic, Dawn of Rebellion…, and as soon as I started reading the first book (ROTS), I just knew.

What if the PCs are members of a Separatist Planetary Defense Force fighting for their freedom from the corrupt, oppressive, and non-representative Galactic Republic?

After that, everything fell into place, and it is now just a matter of getting things down in writing.

My idea for the campagin I am currently running that started near the end of the Clone Wars and is now in the early days of the Empire simply started with me wanting to run this system, and like the cruel GM I am I decided “I want my player’s to suffer through order 66!”