Whacky Rolls and Where to Find Them

What are some of the strangest rolls you’ve encountered during your SWRPG career?

Earlier this very day a player rolled a majority of blanks on his attack check. Let’s just say he missed the Death Trooper by a few meters.

In the same session, one of my other players managed to achieve 8 boost dice on a medicine check, then used the advantage rolled from this check to give the same effect to the next player. Honestly, as the GM I’m glad that happened otherwise a lot of paperwork would’ve happened as both players would’ve likely died during combat later.

The Jedi in the group managed to pull an archaic law out of his rear-end while the party was undergoing a criminal trial on Nar Shaddaa. He prevented the party from being sold into slavery, but EVERY hutt on Nar Shaddaa spits when they say the “space lawyer’s” name, and the party doesn’t go back to the planet often now…

Another weird roll from the same campaign, our Bounty Hunter: Assassin. The party wanted to spread some information to informants on Nar Shaddaa and implicate two opposing hutts against each other (and take the heat off of themselves). Wanting to reroll the first (successful) check, since it had a Despair attached, the reroll ended up being a failure and had two Triumph and two Despair instead.

What was meant to end the hutt arc of the game ended up turning into an accidental turf war between two hutts and the party caught in the middle of it all. At least the triumphs took the party out of the spotlight. 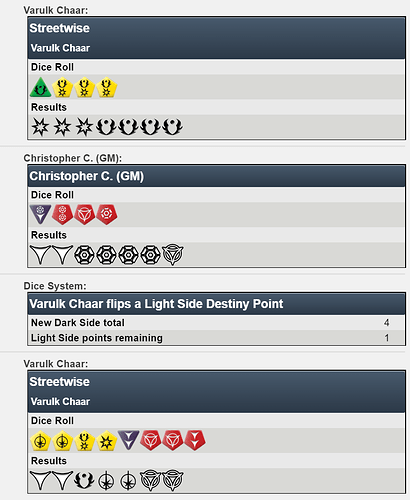 The badass Infiltrator got the ISB agent Nemesis with a Garrote. The agent could alert the base before that (they went on a rescue mission and were undiscovered so far). The NPC doesn’t have any Brawl and Brawn but still would probably fight back. Upgraded with DP so I rolled YG against the PC’s RRRPSS because the second turn of suffocation. He made it, run through the Stormtrooper wall and they shot the other PC (the one that had the friend in captivity) to unconcious. And that’s how I didn’t have to cut half a storyline from my current campaign