Starships. How do they Work?

Alright. Its been a long time coming but I’ve finally decided to formally ask. How in the heck does starship combat work and how does it differ from Personal scale combat?

Thanks in advance, and may the force be with you.
Always.

Capital ships and how they work: Not well.

I suggest you check out my houserule set. If you’re getting in on the ground floor, I’d suggest you start learning with something better than the RAW rules.

But aside from your question regarding movement inside ships, there isn’t enough specificity in your question for me to answer it well. If you have more detailed questions, I will gladly answer them.

Ah, you’re right I should’ve been more specific. I’m mainly talking combat. The book says something along the lines of “Capital ships have large crews to operate each station” (that’s from the top of my head, don’t quote me on that). Would we for say, use a turn for each turbolaser on an ISD?

Nonono, that’s a very bad idea (and the book addresses that). Have you read the sidebar on Capital Ship combat?

The way I run it is I stat the ships like a single NPC (example: Imperial Ship Crew (Nemesis) | SWSheets). They get an Action, a Pilot Only Maneuver, and an additional Maneuver. Then any weapons (excepting “main weapons” like the Onnager’s railguns or the Malevolence’s ion cannons and the like) are grouped with individual minion groups that all fire on the ship’s turn (not taking an action unless fired with the ship crew’s statblock rather than minions).
So a Venator’s 8 Heavy Turbolasers would be fired with two minion groups of 4, for example.

The way the RAW wants you to run it is… undefined. But the way I run the ship’s weapons (minion gunners) is RAW.

If you want more details on how I run the capital ships, this is all in my houserule set and I can answer any questions you have.

Alright. I might need to check on that sidebar again. I’m reading your homebrew right now and there are a couple of things I have off the bat but I’ll wait till I’ve got everything I need to be answered.

There’s a Capital Ship Combat PDF I picked up a while back. I can’t recall who the author was, but we discussed it at length on the old forums.

Oh wait, it was GM Hooly. I found the archived discussion but the links for the PDF no longer work.

There are more questions to come, but this one is urgent.
You’ve added on Sheilds and changed a couple of things. How would I modify the sheet to accommodate these updates?

Simply place Shields in the Defense box. In almost all cases, that will be sufficient.
In the case of something with non-Shield Defense AND Shields in the same zone, I would put a backslash in the box with the Shields number on top and the Defense number of the bottom, but that’s an exceptionally rare circumstance.

What other updates specifically do you need to accommodate?

Yes. Just one for now. I might’ve missed it but how does a ship aquire sheilds? From what I can see the only mods that are in the doc are the weapons.

Defense is just turned into Shields. Perhaps it wasn’t as clear as I thought, but the intention was that the stats port directly over, except at GM discretion.

Defense is just turned into Shields

And this is for Starships only? How would a ship have both defense and shields as you say in the doc? If you haven’t thought this out that is fine. It’s a tremendous service you’ve done us, deciphering the code that is Chapter VII

No, Shields is for any vehicles and starships.

However, most vehicles lack shields, and many have that have Defense have non-Shields Defense.

From the doc (“Silhouette and Defense Zones”): “The maximum amount of defense or shields a ship can have in any of its defense zones is four points, regardless of its size. However, a ship may have both shields and defense in the same arc. In this case, the total number of Setback provided is still capped at four, but the ship may still put up to four points of shields in the arc.”

So, say you have a Hammerhead Corvette with 2 Defense from really tough frontal armor, and 2 Shields from its Shield generator. Both would be in the front arc, and you’d add 4 Setback to incoming attacks, but the Shielded incidental would only reduce the damage by 4 (2[base]+2[shields]).
If you were to shift two points of Shields to the front arc, now you’d still only add 4 Setback, but the Shielded incidental would reduce the damage by 6 (2[base]+4[shields]).

However, most vehicles lack shields, and many have that have Defense have non-Shields Defense.

And I would assume that’s just GM discretion, correct?

Yes. It’s up to the GM to determine which vehicles have Shields vs. Defense or a mix of the two. There are just too many for me to go through by hand and say what’s what.

Most of the time, it’s just Shields though.

And please do keep the questions coming! It’s very helpful for the houserules and I will appreciate it if you uncover any discrepancies or deficiencies so that I may rectify them.

Okay, I’m just about finished with my main concerns. I’ll keep throwing questions at you until I run out though

Positions. Are these just a Subrange that (again) is up to GM discretion/Table 7-4?

It says that Capital ships get 1 action and a chance to fire their weapons. Does this mean they get two actions? Or just one regular action and a weapon-only action?

Positions are subranges that are pretty much up to GM discretion as to when they should be used.

My intention is that subranges would be used for movement and combat, but in some situations (particularly narrative time) simply using the generic range bands would be sufficient. But in a combat scenario, I highly encourage the use of the numbered positions. Usually would be helpful to have a hex grid for it unless you’re only tracking a couple ships.

Capital Ships get 1 Action and a chance to fire their weapons. That isn’t two Actions, that’s one Action and as many “Actions” as it takes to fire all of the weapons that they can and want to fire. The way it fires its weapons is basically RAW.

I’ll think about a FaQ.

Is there a way you’ve found that works well with measuring positions with a hex grid map?

Yes, just one hex per position. Here’s an example from an ongoing battle: 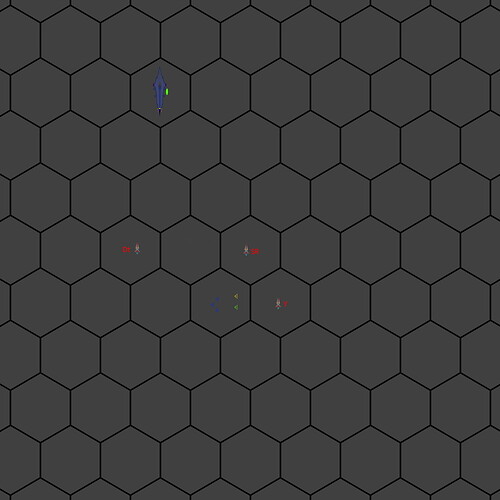