SO! I’ve been plugging away at a new Force Power. Very similar to Seek, but different enough, I think. Seek is for lost or forgotten things. New Wayfind power is for finding planets, sectors and systems, and routes, throughout the Galaxy. We see this in use a couple times in canon. Chiss Sky-Walkers in the new Thrawn Trilogy, and in the High Republic test of courage. 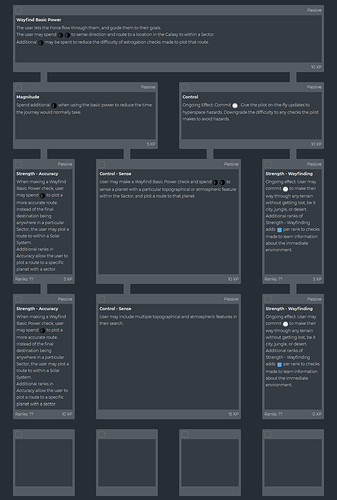 This is what I’ve got so far, and I’d appreciate input!
And a bit on Chiss Sky-Walkers… 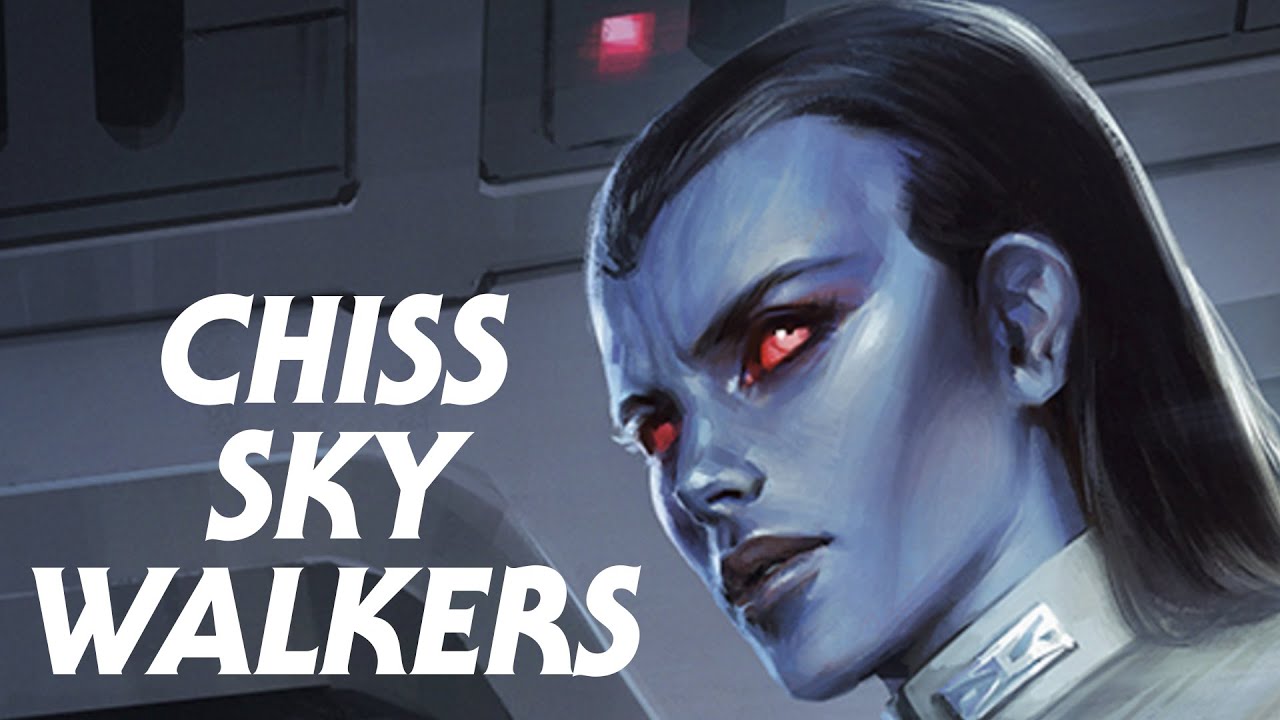 Basic Power: Two pips to activate the base power seems pretty steep. Should this have an FR2 prerequisite?

Control: Is this intended to only affect checks made while in hyperspace? Committing a Force die over downtime (which is what hyperspace travel usually is) seems like it costs nothing. I’d suggest that you change it to affect difficult terrain piloting checks. A downgrade when the pilot is trying to navigate an asteroid field WHILE being chased by TIEs is very helpful.

Strength - Accuracy: “planet with a sector” should be “within.” As for the actual ability, it seems fine. I don’t like how specific it has to be about what an additional rank does, but Force powers don’t have “XYZ” and “XYZ (Improved)” like talents do.

Control - Sense: This is good. Same for the “Improved” version.

Strength - Wayfinding: I think “any terrain” or “any terrestrial environment” works better than adding those three examples, because what about the arctic? What about at sea? What about in a swamp? The way you word it makes it sound like it’s restricted to those three options.
I don’t think it’s good for the second rank to not have the same basic effect as the first, and to only benefit from the Boost thing. I don’t have any suggestions to fix that without rewriting the talent, but I do have ideas for rewriting the talent.
I’d suggest changing the effect to committing a Force die to reduce the difficulty to navigate any terrestrial environment without getting lost once. With two ranks, now you’re reducing it twice. Maybe include some wording about how this can be used when assisting a check (as long at the character is there in person).
Alternatively, simply add Force dice to all checks made to navigate and terrestrial environment without getting lost.
Honestly, I don’t think it needs the Boost ability. I’d suggest dropping it. I don’t think power upgrades ever have two effects unless it’s a dark/light thing (but I could be wrong).

Some suggestions:
You have no “add Force dice to” upgrades. Another option for the “Wayfinding” would be to simply drop the second rank and add this in instead.
You also don’t ever require the character to make an Astrogation check as part of the Force power. I guess that’s okay, but I’d kinda rather they go together. I suppose that’s okay though.
You also don’t ever specify whether a power can be triggered multiple times.

This is all great stuff, thanks!

But yes. I was using Seek as a guide when making this, which is why it started with 2 pips to activate. In talking with other folk, that’s something I think I’m going to change.

To be used in hyperspace was the original intent for control. In the Thrawn Ascendancy book, hyperspace travel is described more as an active process than just throwing a switch, and calling it good! But I’m definitely going to reword it to allow it to work with more than just hyperspace travel!

Thanks for your help!

OKAY SO! In talking to a few folk about it, I’ve overhauled the power… 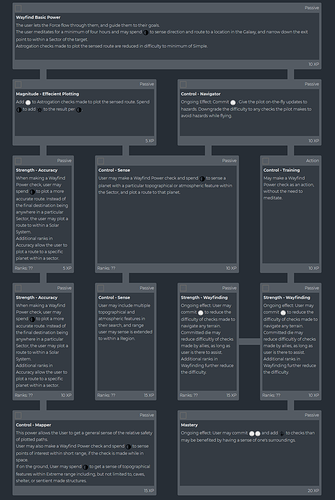 A couple things I’m waffling on, though. I’m unsure about the committed dice in Mastery, whether it should be 2 or 3 dice.
As well, Mapper is only accessible through the Accuracy route. I’m considering connecting it to the bottom of Sense as well.

Base power: It doesn’t specify how much you reduce it by, just that it’s to a minimum of Simple. I presume you intend for the difficulty to be reduced by 1, but that is not stated in the text.

Magnitude: The wording should be something like: “When making an Astrogation check, the character may roll a Wayfinder power check as part of the pool.” You can find the full version to copy from either Influence or Enhance (and others, I’m sure, but that’s off the top of my head).
Also, shouldn’t it be Control?

Control - Navigator: Is your intention that it only allow the player to commit a single Force die? If you’re looking for an example of how to word it, take a look at Misdirect’s “add Threat” control ability.

Strength - Wayfinding: Same as above. “As long as user” should be “as long as the Force user” or just “as long as the user” if you need to save space. You also made a typo in the second appearance of “difficulty.”

Control - Mapper: Add “on the planetary scale” to “short range.” It’s something that could be pretty easily figured out, but always better to have everything worded clearly. Likely, I’d suggest adding “on the personal scale” to “extreme range.” You also need to be consist in your capitalization of range bands.

Master: “Than” should be “that.” Can you give some examples of what you’re talking about here? My inclination would be to say “spend X pips to add a Triumph to Astrogation checks.”

For efficient plotting I didn’t want to include making the check with the description because the base power requires several hours of meditation without the Training upgrade. The way I’m picturing it is, make the base power check to find a route to get to where you’re going. Use efficient plotting to actually input that route into the ships navi-comp. And Navigator upgrade to get there safely!

My line of thought for Mastery was similar to Seek’s mastery. “Make Seek power check and spend L/D L/D L/D to add Triumph to combat checks against one target for remainder of encounter.” But Wayfind’s Mastery isn’t really meant to be used in structured time, so it’s a dice commit! Though I’m still unsure if it should be 2 or 3 dice.

P.S. Thanks for all your help with this! 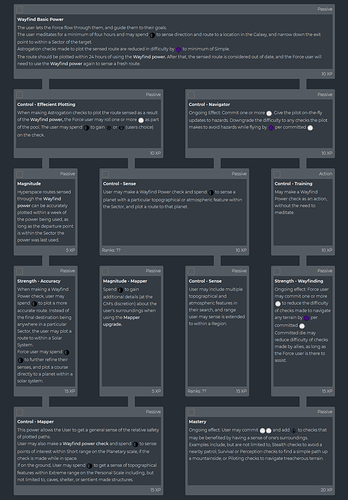 Efficient Plotting: Should say “roll a Wayfinder power check as part of the pool,” as per the precedents from Enhance, Influence, etc.

Strength - Accuracy: I think this should read “may spend an additional [two Force pips]” to make it clear that this requires 3 pips plus the base power, rather than spending 2 pips to target the planet instead of 1 pip to target the system.

Control - Mapper: You capitalize “scale” for “Personal Scale,” but not for “Planetary scale.”

Strength - Wayfinding: Missing a “the” in “committed die may reduce [the] difficulty of checks made by allies.”

Mastery: I’m really not sure committing Force dice makes sense here. I like where you’re going with this, but there isn’t really any cost to committing them since you can easily uncommit them after the ability triggers (Oh, I need to make a Stealth check? Committed. Stealth check over? Uncommitted) so it’s really just a free Triumph. If it was particularly useful in structured time, it’d be a different matter. Maybe make it sort of like the Valuable Facts talent? So when you make a planetside Wayfinder power check, spend X pips to add a Triumph to all checks (made in the affected area) that would benefit by a sense of one’s surroundings.

The other concern I have is simply that you have multiple different Strengths and Magnitudes, and no actual ranked abilities. I don’t think there are any other powers like that.
However, I think it works okay. It’s just a break from RAW styling.